Besides the aforementioned fundamental symmetries, physicists have discovered scores of other space-time symmetries, so that this ethical system may be improved in proportion as we integrate new symmetries.

Fundamental laws are “invariant” or constant; thus the unity of rationality is preserved. Thanks to this invariance (symmetry) of laws, a scientist established in Buenos Aires can perform the same experiment as if he were in Tokyo, and he will get the same results. Gravitation on the Moon follows the same laws as on Earth, even though it is proportional to the mass.

Therefore, designing an ethical system based on the laws of symmetry presents an immense advantage: that of making it universal. 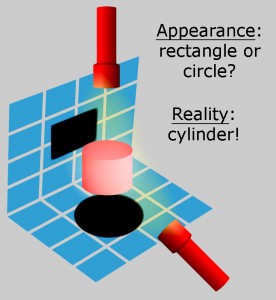 Suppose I hold a cylinder before me: you would see a square while I, looking at it from above, see a circle. And yet, we see the same cylinder, the same reality. Perceived reality merely depends on our viewing angles. Our different points of view result in two different truths for a single reality! In fact, these truths are incomplete. They are due to our brain which, initially, forges an abstracted reality, because he disregards Other’s points of view. By  including these other points of view our brain will gradually end up perceiving a more truthful reality.

This discovery has, of course, an ethical bearing. It suggests humility and the respect of the Other’s opinion, because everyone sees the same nature from a different point of view. Whether one is a tanner or musician, a monk or gas-station attendant, a mechanic or physicist, all of us can know the same reality or at least some parts of it.

Empathy, is an innate sense which opens us towards the Others. It gives us access to other points of view and a  far more complete and concrete vision of reality. Dialogue, studies, travel, curiosity are invaluable tools to understand Other’s points of view.

This discovery also tells us that we are equal observers, although different because of our situation, and that plurality and diversity are not contrary to the principle of equality.

Finally, this diversity of “points of view” imposes upon us a spirit of tolerance. Nature tells us that there is a wealth in reality, and that it is up to us to discover the normative values that will best help us to find the right ways.