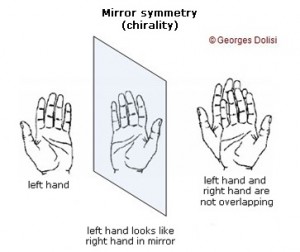 Take the example of two hands, clasped thumb against thumb. They are symmetric, as in a mirror. However, these two hands are not stackable, as would be a bilateral symmetry. Louis Pasteur was the first to discover this form of symmetry/asymmetry which he called “chirality”.

If we were looking for self-referring ethics, this kind of symmetry would bring narcissism and self-love to our mind. Yet the mirror does not reflect its own image. It is not selfish! It always reflects an image other than its own. This mirror symmetry suggests the principle of reciprocity, a value which is objective and which opens unto the Other.

Reciprocity is a well-known, very old value. It is the basis for the famous “Golden Rule” which was first suggested by Confucius: “Do not do unto others as you would not want others to do unto you.” It is a value that has proven its worth. Virtually all religions have adopted this principle. When GB Shaw suggested “Do unto others as you would others do unto you”, the formula ceases to work, because others may not have the same taste as you!

We must distinguish “reciprocity in the good” whose reference is life and “reciprocity in the “evil” whose reference is no longer life, but revenge, if not death! The deterring effect of the lex talionis – “an eye for an eye, a tooth for a tooth…” – is well known for its dissuasive effect; however, its perfect symmetry traps it in a vicious circle, hindering any evolution. It requires forgetting the great wisdom of the Ancients, who invented “forgiveness”, a form of tolerance which breaks the symmetry of this law and allows situations to evolve.

In another context, this symmetry suggests TRUTH as a mirror of reality. “Adaequatio rei et intellectus”, “The intellect [of the knower] must be adequate to the thing [known]”, as the Ancients put it. Truth is a kind of mirror of reality as seen, heard, felt, and then described by the subject. Truth should be objective because its reference is that which is born of the rupture of symmetry: what “IS.” Therefore, it depends on the place, the time and the perceptions of the subject, which reflect an image of the truth to him, as with mirror symmetry, but slightly deformed (inverted sides). What is “true”, in this sense, is synonymous with what “IS”. Truth is living, it changes according to time and space. However it cannot be one thing and its opposite! The principle of non-contradiction is its bulwark. Truth is only another facet of life, of the living and dynamic reality.

Untruths or lies are a distorted representation of reality; they only reflect the thoughts of the subject, they are self-referential. Truth is fragile; it depends on balanced force ratios, failing which it loses its objectivity, its reliability, and becomes subjective. In relations between a strong person and a weak one, it may occur that the person in the weaker position resorts to lies for protection. But the opposite is more serious: “Might makes right!” said La Fontaine. In such a case, the truth of the stronger person becomes ever more subjective, reflecting only his thoughts, his vision, his peace, his price; in other words, his falseness. A great imbalance corrupts the quality of the relationship and destroys the truth.

Reality is ever changing, because interactions are constantly shaping, kneading and remodelling it. When we try to define truth through words or texts, without specifying any time or space criteria, we risk placing it out of touch in relation to the living and evolving reality. That is the problem of legislatures, which have a hard time adapting to the changes in reality.

There is an objective and specific truth, the reference of which is a kind of perfect symmetry. I am referring to the mathematics. Equations might be “right” yet they may not necessarily be “true” An abstract mathematical model might appear to be coherent but not necessarily true and predictable if the equations are not in tune with the living or real world. We have observed such a situation in 2008 when the “Gaussian” financial mathematics failed[1] and financial markets collapsed.

Truth, like liberty, therefore appears as another facet of reality. It consists of a referential system and of interactions of symmetrical nature, i.e. force ratios. Reciprocity, solidarity, truth, all are important values in any forms of relationship, whether personal, commercial or diplomatic. They create social ties.